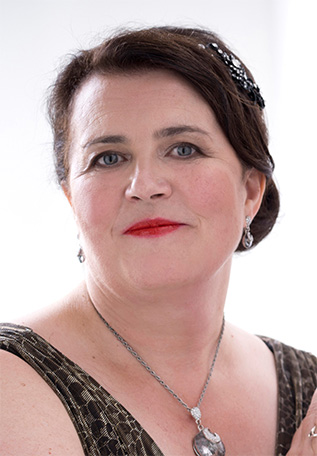 Sarah-Jane has given recitals at the Royal Opera House, Covent Garden, Banqueting House, Whitehall, in Russia (Moscow and Tver), Dulwich Picture Gallery, Hammerwood Park, Leighton House and Lauderdale House and for numerous music clubs and private clients throughout the country.

She studied at Guildhall School of Music and the Britten-Pears School in Aldeburgh.

Through the Cardiff Singer of the World competition she was chosen to represent the UK in the Rimsky-Korsakov Competition in St. Petersburg, reaching the semi-final. She is also the winner of several awards including the Susan Longfield Award, Caird Foundation Travelling Award, Wingate Scholarship, Schubert Prize and Ann Wyburd Awards (GSMD) and was runner-up in the International Voices of Discovery Competition.

She works closely with a number of composers throughout the world and has premiered numerous pieces in recitals and concerts.

She has also recorded two CD’s with Luisa-Maria Cordell and one with Tenor, Andrew Morris.

This website uses cookies to improve your experience while you navigate through the website. Out of these cookies, the cookies that are categorized as necessary are stored on your browser as they are essential for the working of basic functionalities of the website. We also use third-party cookies that help us analyze and understand how you use this website. These cookies will be stored in your browser only with your consent. You also have the option to opt-out of these cookies. But opting out of some of these cookies may have an effect on your browsing experience.
Necessary Always Enabled
Necessary cookies are absolutely essential for the website to function properly. This category only includes cookies that ensures basic functionalities and security features of the website. These cookies do not store any personal information.
Non-necessary
Any cookies that may not be particularly necessary for the website to function and is used specifically to collect user personal data via analytics, ads, other embedded contents are termed as non-necessary cookies. It is mandatory to procure user consent prior to running these cookies on your website.
SAVE & ACCEPT